You wouldn’t be surprised if we told you that Brock Lesnar eats like a monster.

You’ve probably heard the proverb “Eat large to get big,” Brock Lesnar has been a follower of it since he was a little boy. However, that doesn’t imply that he can eat whatever he wants.

He follows a strict food regimen that provides his body with all the nutrition to unleash the beast within him.

This post will shed some light on Brock Lesnar’s diet strategy. Here, we’ll talk about his daily menu, the foods he consumes and stays away from his supplement regimen, and much more.

So let’s get right into Brock Lesner eating habits, one of the most well-known WWE wrestlers. 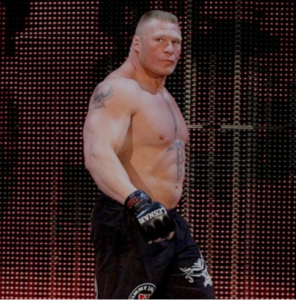 Brock Lesnar consumes a diet packed with protein and calories. In South Dakota, he was raised. From his earliest years, he had a familiarity with hunting. Even now, Lesnar chooses to eat beef rather than meat purchased from a shop.

Game meat is derived from wild and unconfined animals. That kind of beef is known for its low-fat and low-cholesterol composition. Additionally, it doesn’t contain any additional hormones or antibiotics frequently found in supermarket meat.

Since he was little, Brock Lesnar has lived in the country. Even the vegetables he ate were homegrown, which usually means they contain more nutrients than the ones we purchase from the grocery store.

The basis for Lesnar’s enormous body that still destroys his opponents in the ring was built by his eating habits as a child.

Lesnar has never given a detailed account of his nutrition regimen because he is a private individual who avoids the spotlight outside the ring.

He did, however, once claim that he consumes up to 3200 calories a day. He further mentioned that he takes in about 300 grams of protein each day to feed and maintain his enormous frame.

Foods high in lean proteins are a part of Brock Lesnar’s diet regimen. His muscles can recover from rigorous exercise sessions and get restored by eating enough protein.

Foods high in complex carbs like potatoes and brown rice are also part of Brock Lesnar’s nutrition regimen. Because they are a fantastic source of energy, carbohydrates give his body the power it needs to endure his rigorous training schedule.

Diverticulitis was identified as Lesner’s condition in 2009. He prioritized many animal products in his diet, which was most likely the cause.

At the time, he rarely consumed green vegetables. His diet began to be deficient in fiber as a result. After successfully recovering from the surgery required to treat his diverticulitis, Lesnar made a point to include a lot of fiber in his diet.

He tries to increase his fiber intake by taking a greens supplement because he dislikes eating excessive amounts of vegetables. Probiotics in it also aid in maintaining his gut’s health.

One of the essential supplements in the supplement regimen of the majority of athletes is whey protein. It swiftly assimilates into the bloodstream and gives the muscles an immediate supply of vital amino acids thanks to its quick digestion.

Brock Lesnar likes to eat 30 grams of whey protein after a workout. Along with it, he eats high-quality carbohydrates, which help to refill his glycogen reserves.

Brock Lesnar adds an excellent herbal supplement to his food regimen to maintain optimal gut health.
It includes slippery elm, which prevents constipation, licorice root, which heals the lining of the intestines, and flaxseed, which lessens colon inflammation.
Additionally, it contains turmeric, which soothes tummy aches and promotes the release of digestive enzymes, and marshmallow root, which defends the intestinal wall.

Additionally, it aids in delaying the onset of weariness, enabling you to complete the final two or three repetitions of the exercises.

As a result, more muscle fibers are recruited and stimulated, which leads to increased growth and improved athletic performance.

Lesnar was raised in South Dakota, where he first learned the meaning of adversity, willpower, and endurance.

He was given a particular training regimen to increase his power and agility when he was young. Due to the lack of gyms in his own country, Lesnar used the family Webster dairy farm equipment to bulk up.

As his MMA and wrestling career developed, Lesnar gained more insight into the value of cardiovascular fitness, strength, and stamina.

He currently exercises four days weekly, doing two concourses daily. He performs his wrestling and fighting techniques in the morning and his strength training and sport-specific drills in the evening.

Tuesday: Biceps and Back

So now you are aware of Brock Lesnar’s nutrition strategy. Brock Lesner’s diet plan teaches us all that it’s important to care for our bodies on the inside as much on the outside.

Running should not be restricted to those with a muscular body. but should, like Lesner, also place a strong emphasis on one’s own health and wellbeing.

👉 How many hours a day does Brock Lesnar workout?

As a wrestler and MMA fighter, Brock Lesnar has a routine that aids his preparation for both activities. Lesnar might work out for as long as two or three hours per day.

He divides his weight training and MMA workouts into two separate sessions.

👉 Does Brock Lesnar use free weights?

Brock, though, spoke extensively about his life and profession during the program. The Beast also shared his exercise routine and secret, which he has used for over ten years.

“I’ve worked with the same trainer for maybe 17 years. I, therefore, stopped using free weights perhaps 10 to 12 years ago.